US President Donald Trump To Return To White House Tomorrow 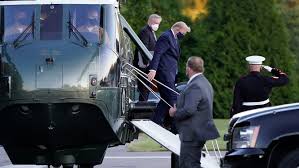 WASHINGTON| SHIFTMEDIA|After being admitted to Walter Reed Hospital on Friday, White House Physician Sean Conley has now, in his latest statement, claimed that Trump continues to do ‘very well’.

He even said that the president may be leaving hospital tomorrow if his condition continues to improve.

President Trump tweeted a video in which he said “I came here, wasn’t feeling so well. I feel much better now. We’re working hard to get me all the way back. I have to be back because we still have to make America great again. We’ve done an awfully good job of that, but we still have steps to go and we have to have to finish that job.”

“I had no choice because I just didn’t want to stay in the White House. I was given that alternative — stay in the White House, lock yourself in, don’t ever leave, don’t even go to the Oval Office, just stay upstairs and enjoy it. Don’t see people, don’t talk to people, and just be done with it — and I can’t do that. I had to be out front, and this is America, this is the United States. This is the greatest country in the world, this is the most powerful country in the world, I can’t be locked up in a room upstairs and totally safe and just say, hey, whatever happens, happens, I can’t do that.”

The First Lady also tested positive for COVID-19 this week, and President Trump shared that she’s doing well, joking that she’s “just a little bit” younger than he is and her age is helping her recover.

He said “I just want to be so thankful for all of the support I’ve seen, whether it’s on television or reading about it. I, most of all, appreciate what’s been said by the American people, by almost a bipartisan consensus of American people — it’s a beautiful thing to see. And I very much appreciate it and I won’t forget it — promise you that. I also want to thank the leaders of the world for their condolences and there — they know what we’re going through.”

Doctors, Nurses and ALL at the GREAT Walter Reed Medical Center, and others from likewise incredible institutions who have joined them, are AMAZING!!!Tremendous progress has been made over the last 6 months in fighting this PLAGUE. With their help, I am feeling well!

He has nothing but praise for the staff at Walter Reed Medical Center, however, it’s unclear whether his health is improving or if his condition is concerning.

The White House source went on to say that President Trump’s “vitals over the last 24 hours were very concerning and the next 48 hours will be critical in terms of his care.”

According to The Washington Post, “Trump was struggling with a low-grade fever, a cough, and nasal congestion, among other symptoms”, at the time.

Now his doctor has given yet another update on POTUS.

COVID-19: Loss of Smell A ‘Highly Reliable Indicator’ Of Infection-Study