EQUALITY: Bobi Wine Warns Security Against Oppressing His Supporters As He Gets Nominated

WAKISO, Uganda|SHIFTMEDIA| “We have seen how other Presidential candidates were treated today, we shall also seek for similar protection we get nominated tomorrow,” said National Unity Platform Presidential flag carrier, Robert Kyagulanyi Sentamu aka Bobi Wine.

Kyagulanyi, also the Kyadondo Member of Parliament asked police and its sister security agencies to protect his supporters as he heads to Kyambogo sports ground for nomination on Tuesday.

Robert Kyagulanyi will be nominated at 10 am at the Kyambogo cricket grounds on Tuesday, November 3 2020. 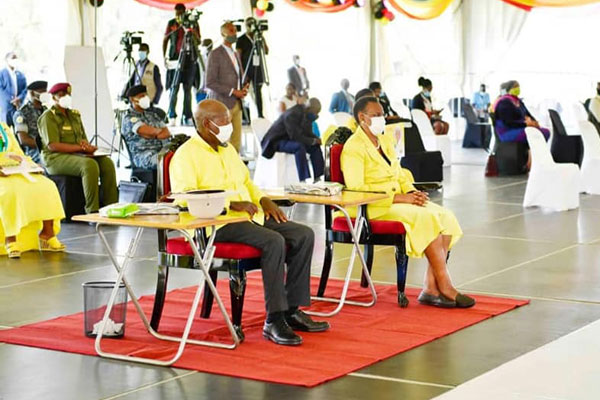 In a tweeted message Kyagulanyi said: “Police has written to me about this route as I go for nominations tomorrow. We have no problem and we shall follow this route to the nominations venue. After that, we shall head straight to our office in Kamwokya where we shall launch our manifesto! Today, we saw people mobilised by NRM standing along different roads, guarded by the police, unmolested. We hope the police will behave the same way if our supporters stand by the road to wave to us.”

Authorities said Bobi Wine will be escorted by Uganda Police Force with a lead traffic vehicle/ motorcycle to nomination venue with his team as per Electoral Commission guidelines.

“Your route to and from the venue will be; Magere, Kumbuzi, Kisasi, Ntinda Stretcher road, Spear Motors, Kyambogo University Junction, nomination venue. We look forward to your positive cooperation in this exercise,” reads part of the police letter signed by IGP Martin Okoth Ochola.

DISASTER: One Year Old Tests Positive For COVID19, As Numbers Surge Past 50K